JeuxOnline  : Hi Darrin, could you please introduce yourself and talk about your job with Sigil?

Darrin : My name is Darrin McPherson.  I am a game designer at Sigil.  My primary focus has been the development of the Vanguard combat system and the design of our adventuring player character classes.

JeuxOnline  :  Vanguard has many original classes, like the Blood Mage, or the Disciple (master of « Chi »). Can you give us those classes' main features? What are the major differences with a pure healer like the Cleric?

Darrin : The Blood Mage is still a pretty closely guarded secret.  I can say that he will be able to use his own life and the life of enemies to heal and buff his allies.  He will be the most arcane flavoured of our healers, so unlike the Shaman, Cleric and Disciple he will be a very poor melee combatant.  He will make up for this with powerful direct damage spells.

The Disciple, on the other hand, is quite proficient at combat.  While he does not deal near the damage of an offensive fighter, he can still make a valuable contribution to the melee damage output of the group.  He also excels at the refocusing the attacks of his enemies into debilitating debuff effects.  Opponents should be wary of trying to attack a Disciple – it may end up be a horrible mistake.

There is no notion of a “pure healer” in Vanguard.  All healing classes (Cleric, Shaman, Disciple, Blood Mage) all heal with roughly the same proficiency.  Each class then has other aspects of their gameplay that differentiate them from the rest.

JeuxOnline  :  Will Vanguard's spells be customizable? If so, how far will it go in terms of modifying spells by adding or removing effects or casting costs?

Darrin : No, Vanguard spells will not be customizable in this way.  There will be effects and items that may alter the costs and cast times of spells.


JeuxOnline  :  What happens when a player reaches a new level? Does he automatically become stronger, tougher, more intelligent, or does it change nothing as long as he doesn't put the skill points he has in some skills or attributes?

Darrin : A few things happen.  A player becomes eligible to new abilities.  He gains more skill and attribute points, which he can invest.  These skill ups in both skills and attributes must be earned though, so gaining level 12 does not automatically set your strength to 200 for example.

Another very interesting and exciting feature is the ability to learn attacks and spells through using your pre-existing abilities.  So, if you have had the opening attack Brutal Strike, since level 1, at level 6 you can begin to learn the bridge attack by using Brutal Strike.  Eventually the ability will be added to your list of attacks.  This, in addition to being able to learn abilities from observing NPCs, makes levelling up a Vanguard an exciting thing.

JeuxOnline  :  Will players be able to learn every skill available to their chosen class as they advance, or will there be a skill tree type of system, where they must pick and choose which direction they wish their character to take?

Darrin : Most base abilities will be available to you regardless of what path you choose as a character.  There will be some abilities that may be more difficult for you to get because of the path that you have chosen.

JeuxOnline  :  In closing, do you have anything else you would like to share with the French-speaking community?

Darrin : Vanguard promises a grand experience in a beautiful, breathing world.  Thank you for the opportunity to address these questions.  I hope to be able to give out more information in the future.   We look forward to see all of you in game.

JeuxOnline  : Thank you Darrin for the time you have taken to answer our questions. And good luck to SIGIL. We're confident that the game you are preparing will be the one we have all been waiting for, for so long. 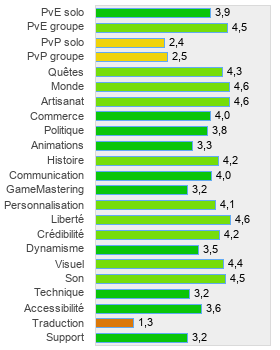